Our goal is to assist you in obtaining whatever is lawfully and legally yours.  In a will, the decedent has created a paper that identifies those things that are to happen after the person dies.  That paper is the will.  The will identifies the beneficiaries and how the decedent wanted his assets and debts handled after his death.  It is the executor’s obligation to ensure that all of the decedent’s wishes are fulfilled, at least to the extent possible.

Many times, decedents leave property in their will that they did not own at the time of their death either because they gave it away earlier in their lives or they had sold it or it merely became obsolete and was discarded.  Our firm can assist in determining what should be done in situations like that. Sometimes you do nothing.  Other times you must give the beneficiary something of equal value. Also, decedents may leave cash if to various beneficiaries.  On occasion, the decedent does not have enough property to fulfill those cash gifts at his death.  Again, we can assist you in determining your obligations as executor in fulfilling the decedent’s wishes

When someone passes away and you find an original will created by the decedent, you are required to file the will with the probate court in the county where the decedent lived.  The will can be filed for probate or for safekeeping.  Therefore, if you are the one who has located the will, and you have possession of it, it is your legal obligation to give that will to the court.  Many times, a will does not have to be offered for probate, but simply needs to be filed with the probate court.

The reasons for not filing a will for probate generally involve situations where the decedent does not own any assets for which probate is necessary in order to transfer those assets to their intended beneficiary.  Examples of this are real estate that is owned jointly with right of survivorship with another person.  Other examples are bank accounts that are held in joint name or accounts for which there is a designated beneficiary.  This includes investment accounts, retirement accounts.  Also, life insurance policies generally have named beneficiaries and do not require probate.  All of these assets will be transferred to their rightful owner directly because the bank or financial company holding those assets is obligated by contract to pay those assets to the named beneficiary.  The named beneficiary on the various contracts will prevail over statements in the will to the contrary.

For instance, if the decedent divorced his wife 20 years ago and had a life insurance policy at the time of the divorce that named the wife as the beneficiary, the decedent was required by law to change the beneficiary from his wife to another person if he did not want her to inherit or receive those proceeds.  Just after the divorce the decedent prepared a new will, specifically stating that he did want his former wife to inherit any of his assets.  The beneficiary designation on the life insurance policy will prevail over the decedent’s desires to exclude his former wife from his estate.  This is especially troubling if the decedent died and was remarried. The new wife has little opportunity to prevail over named beneficiary for the proceeds.  As with most rules in life, there are some exceptions to the above, and this firm can help you sort through those exceptions. 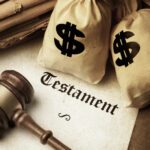